I was absent for a very long time... To my wonder that Kipalog is still alive. It's a very good news.

Today I show you a brief tutorial about Image and Pixel Processing in JAVA. A proverb says "a picture is more than thousand words". How true! Even Confucius had to concede:

"If you tell me about it I'll forget it,
If you show it to me I'll remember it,
If you let me do it I'll understand it"

So. I show you and let you do so that you remember and understand what Image and Color are. First, let talk about a digital Image (or picture if you so will). What is a digital image? 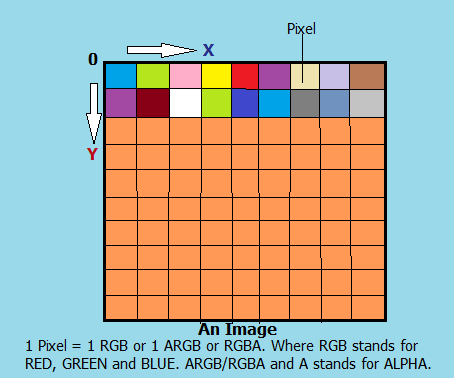 A digital image is a group of PIXELS (PIX for Picture and EL for Element) which are represented by a combination of 3 different colors: RED, GREEN and BLUE or RGB for short. If a pixel can be made opaque or transparent it is an ARGB, where A is the controlling element. To represent the RGB or ARGB a computer needs at least 3 bytes (RGB) or 4 bytes (ARGB). And each byte can be displayed in 2 hex digits: 0x00 - 0xFF. For examples:

As you see, with the ALPHA byte a Color (or Pixel) has 255 variable possibilities between total opaque to total transparent. Pic.2 shows you how an ARGB looks like: 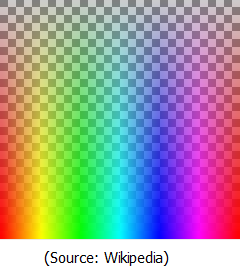 Everything looks good. BUT why I have mentioned ARGB and RGBA? Well, the world is not a simpleton, but always a YING-YANG world. IBM computers usually work with BIG-ENDIAN and some others work with LITTLE ENDIAN. What is that, the endian? It's the byte-sequence to represent a number or an address. Examples:

For human, the left digit is always higher than the next right digit and LITTLE ENDIAN is for human easier to understand than BIG ENDIAN. Luckily is that JAVA uses LITTLE ENDIAN to store its data (in files).
ARGB

You can run this little program to see the ENDIAN of your computer:
Java:

and the output from an INTEL PC will be:

From the RGB or ARGB/RGBA structure it's obvious that the value of RGB (or ARGB/RGBA) can only be presented by an integer (or 4 bytes). If you are working with another OOPL than JAVA you have to be carefully to consider the ENDIAN because the interchange between bytes and integer is dependent on the endian. As said, JAVA stores and works with LITTLE ENDIAN. The conversion between 4 bytes and an integer is a straightforward work:

You may wonder why I have to AND a byte with 0xFF, am I right? Well, JAVA doesn't have UNSIGNED byte, hence the term "byte & 0xFF" signifies an internal conversion of a byte to an int before the AND operation can be executed. Example:

IT or Computer Science (CS) without Mathematics is like a flower without water. If you don't master the most basic mathematical knowledge you wither like a flower. CS works with binary system and knows only ONE operation: addition. The other operations (subtract, multiplication and division) are derived from Addition. Binary means 0 (zero) or 1 (ONE). Not zero is one and vice versa. In Math an opposite of a binary number can be represented by either the FIRST Complement or the SECOND Complement:

With the complements Sub, Mul and Div can be implemented. I don't go into details with the MUL/DIV binary operation but show you how the Sub works. The algorithm is as following:

Depend on the sign the result could exceed the digit number of subtractor and subtrahend. If so, it's an OVERFLOW and it can be ignored.
Example: 4-digit bits, the 1st digit is the sign (0: plus, 1: minus)

In reality we rarely deal with binary operation, but the binary knowledge helps us to derive and to estimate an operation. Addition is the fastest, then Subtraction, then Multiplication and the slowest is Division.

Back to an Image and Pixel.
In the past we have to take an image on a film and develop the image into a picture. The image is the negative, and the Picture is the final result. Similar to that, a digital image can be easily "reversed" into a negative by complementing the pixels. A Pixel is an integer or a 4 bytes value. To "negative" a Pixel we have to partition it into 4 bytes as I showed you above and then complement each byte with 255 (or 0xFF):

And every image is consisted by width * height pixels (see Pic.1 of the 1st session. The width is the X axis, the height is the Y axis). The negative of an image is then:

Note:
It's a long tutorial and I have no interest to repeat the whole tutorial here on Kipalog.com. If the admins think that my blog is an ad then pls. delete it and remove my account from Kipalog.com

This tutorial is a summary of the two last tutorials 1. OCR: (Link) 2. JAVA: (Link) With the knowledge we have about the way how to process an Ima...
Nobody viết 3 tháng trước
1 0

Hi Some developers whose native language is NOT English seem to be either bad in English or too lazy to read the APIs. However I have an impressio...
Nobody viết 2 tháng trước
1 0
Bài viết liên quan