Difference between Rails 4 and Rails 5

This article will discuss about the difference between Rails 4 and Rails 5, what new in Rails 5.
Before come to the details let take a quick look at Rails 4 if you have yet know about that - (http://guides.rubyonrails.org/4_2_release_notes.html).
what is changing on new version.

Rails 4 requires Ruby 1.9.3 or higher and prefers Ruby 2.0 while Rails 5 only work with Ruby 2.2.1 or better.
Rails 5 is a new major version of Ruby On Rails, this implicates that the Rails API and requirements can change to deprecate, add new, and/or improve existing APIs, but also to take advantage of important changes in the Ruby language as well.
Symbols were not getting garbage collected prior to Ruby 2.2.1. From the release of Ruby 2.2.1, symbols are garbage collected as well.
Advantages of Symbol GC available in Ruby
Ruby Garbage Collection Example:

The above example shows that symbols are not garbage collected in ruby 2.1.2 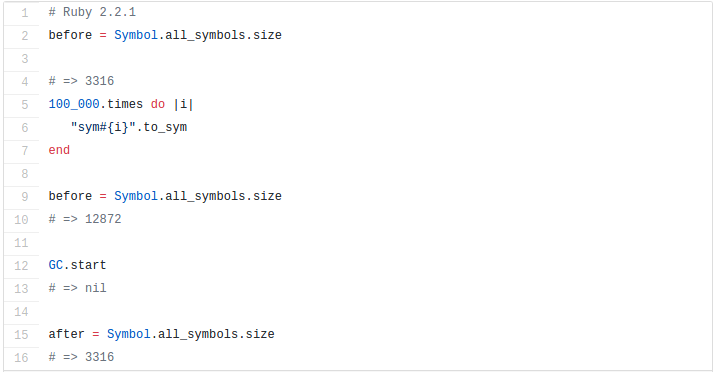 And this output clearly shows how symbols get garbage collected in Ruby 2.2.1+

When we invoke GC it may/may not start garbage collection - but it will clean symbols that have no reference as shown above.

Rails 5 have the changes related to removing code that was marked as deprecated in previous versions of Rails.
Notable removed APIs are:

assert_template and assigns() assertions are deprecated and moved into its own gem rails-controller-testing.

Clean up in Rails 5 also includes dead code and unnecessary tests. Also, mocha is being removed from Rails tests in favor of plain Minitest stubbing.

With Ruby 2.2.2, Rails 5 should get an improvement in performance, less memory usage, and less time spent in GC. This alone should help alone to bring this performance boost.
Outside, Richard Schneeman had merged a lot of performance improvement to Rails. The patch has improved the performance almost 11%.

More inform, Richard Schneeman is a Ruby developer at Heroku and loves contributing to Rails - https://github.com/schneems.

When we call to_s on nil object then - it allocates empty string object and returns. Thus, this is a new string object allocation. If you’re doing this in loop or calling it multiple times somehow then it will be creating a lot of string objects causing increase in memory allocation.

Basically performing to_s operation only if object is not a nil object.

If you've used Rails before, you'll have to unlearn using the rake command in the terminal to run tasks . In Rails 5, you can do everything with rails command.

Finally ActiveRecord::Relation is getting #or method, this will allow us to write queries with ActiveRecord DSL as follows:

or method accepts a second relation as a parameter that is combined with an or. #or can also accept a relation in a form of model scope.

belongs_to is required by default

From now on every Rails application will have a new configuration option config.active_record.belongs_to_required_by_default = true, it will trigger a validation error when trying to save a model where belongs_to associations are not present.

config.active_record.belongs_to_required_by_default can be changed to false and with this keep old Rails behavior or we can disable this validation on each belongs_to definition, just passing an additional option optional: true as follows:

Many a times - people implement Backend in Rails just as a API server - Rails API only application is designed for such use cases.

So, in such cases you don’t need entire Rails Stack for your Application. To solve this - Rails 5 has implemented API only option - which would create minimalistic Rails application.
Why API app instead of complete Rails App?

do this: inherit from ActionController::API

What problem is solved by ActionCable?

Suppose you have a mailing application, where you would want to update a new email in the browser as soon as received.

You can keep polling after some time interval to server side (backend) and if you get new email in response then update the DOM with the content received from backend via javascript. But, this would result in many number of polls void/useless.

Channel - A Cable can have multiple channels. Channels need to be created to send or receive for various functionalities that need solution to the similar problem discussed above.

What make power on Rails 5.

Rails 4 was great choice for developer. But with all of changes on Rails 5, it really excites me and I think you too. Beside, Rails 5 quite new So You should concern that there may be many gems that are not ready for 5.

Welcome back, Before reading this chapter, let make sure that you already read through on chapter (Link). In previous chapter I already talk about ...
pdkproitf viết gần 4 năm trước
2 0

This article will discuss about the basic styles are used common on Rails include: How to use Ruby convention on Rails and Rails convention. Why c...
pdkproitf viết gần 4 năm trước
1 0
{{like_count}}